Chris Rodning, the Paul and Debra Gibbons Professor in the Tulane School of Liberal Arts' Department of Anthropology, unravels early entanglements between Native Americans and European explorers, revealing how their interactions shaped the history of the American South.

"Native Americans' responses to Spanish explorers and colonists form an important part of the story behind the history of European colonialism in North America," said Rodning, who conducts archaeological research at Fort San Juan, the earliest known permanent European settlement in the interior United States, located near Morganton, North Carolina.

Since 2001, Rodning has collaborated with David Moore, an anthropology professor from Warren Wilson College, and Rob Beck, an associate professor of anthropology from the University of Michigan, to excavate the site. 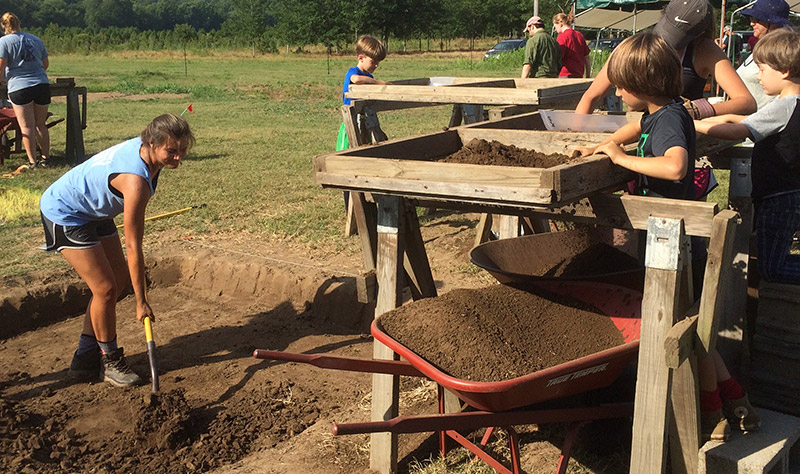 "In 2013, we identified the archaeological footprint of the fort," said Rodning, noting that the team has since focused on learning how the structure was built and where it was located in relation to a nearby Native American settlement called Joara.

In 1540, the conquistador Hernando de Soto traversed this part of western North Carolina.

"He threatened communities with violence, demanded food and sometimes attacked when they did not comply with his demands. He also pressed Native Americans into service as porters to carry supplies for his men," said Rodning.

One generation after de Soto's expedition, Spanish explorer Juan Pardo arrived with another group of soldiers and established Fort San Juan in 1566.

"When Pardo marched inland, the town of Joara was a much more powerful town than it had been 26 years previously," said Rodning "possibly because of Joara's previous interactions with de Soto."

At first, an alliance formed between Pardo and the people of Joara, but in 1568, warriors from Joara sacked the fort and burned the compound.

"Architectural materials and designs of burned houses at the site demonstrate evidence of the typical Native American style of architectural design and construction, but some wooden fragments also indicate that they were cut and shaped with metal tools. The significance of that is Native Americans didn't have those types of metal tools," said Rodning.

Rodning said that it's likely that Native Americans gained access to these new tools from Spanish soldiers, or that Spanish soldiers participated in the construction and maintenance of houses where the men garrisoned at Fort San Juan lived.

Rodning said his team remains committed to the project in hopes of understanding how early moments and subsequent episodes of Spanish contact changed Native American communities in this region.

University Press of Florida published the group's findings in a book called Fort San Juan and the Limits of Empire: Colonialism and Household Practice at the Berry Site in 2016.

Hannah Hoover, a Tulane senior double majoring in anthropology and classical studies, digs dirt from excavation squares at the Fort San Juan site and throws it up to sifters to screen the dirt in search of artifacts. (Photo by Christopher Rodning)