Tulane Conference on Linguistics: Language Use in Postcolonial and Transnational Contexts

Tulane Conference on Linguistics: Language Use in Postcolonial and Transnational Contexts 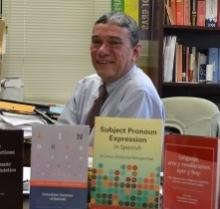 Tulane University’s second annual Conference on Linguistics will be held in the Qatar Ballroom in the Lavin-Bernick Center, from 9:00 AM until 2:00 PM. Come hear some of the interesting linguistics research happening at Tulane University, with a focus on language use in postcolonial and transnational contexts.

The guest speaker, Dr. Rafael Orozco, an Associate Professor at Louisiana State University, has a focus on several areas of interest including sociolinguistics, Colombian Spanish, Spanish in the United States, Caribbean Spanish, language contact, and multilingualism. He has published in a variety of journals including Revista Internacional de LingÃ¼ística Iberoamericana and LingÃ¼ística, and contributed to several edited volumes including Colombian Varieties of Spanish and Subject Pronoun Expression in Spanish: A Cross-dialectal Perspective. In his latest book, Spanish in Colombia and New York City: Language Contact Meets Dialectal Convergence, Orozco provides an empirical, comparative study of Spanish in Colombia and New York City.