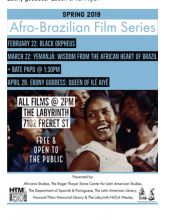 This spring, join the Africana Studies Program, the Stone Center for Latin American Studies, Departments of Spanish & Portuguese, the Latin American Library, the Howard-Tilton Memorial Library at Tulane University in collaboration with The Labyrinth-NOLA Wesley for the 2019 Afro-Brazilian Film Series.

The films are free and open to the public.

The Spanish and Portuguese Department is hosting this talk with two masters of the art of capoeria. Mestre Joao Grande is one of the last remaining Mestres from the Velha Guarda. He moved to New York in 1990 and, at 86 years old, he continues to hold capoeira classes at his academy in Harlem. He is a student of Mestre Pastinha, the father of capoeira Angola. Mestre Jelon is also from Bahia, and he was the first capoeirista to open up a school in the US back in the 70's.

A weekly hour of Portuguese conversation and tasty treats hosted by Prof. Megwen Loveless. All levels are welcome!

The theme for this semester will be Passion Fruit. So bring your sweet tooth to try this week’s homemade delicacy: Cheesecake de maracujá. 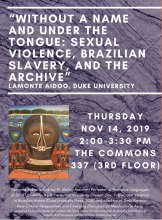 Without a Name and Under the Tongue: Sexual Violence, Brazilian Slavery, and the Archive

Join the Spanish & Portuguese Department, Africana Studies, the SLA Center for Scholars, and the Stone Center for Latin American Studies for a presentation by Lamonte Aidoo, entitled “Without a Name and Under the Tongue: Sexual Violence, Brazilian Slavery, and the Archive.” Aidoo is the Andrew W. Mellon Assistant Professor of Romance Languages at Duke University and the author of Slavery Unseen: Sex, Power, and Violence in Brazilian History.