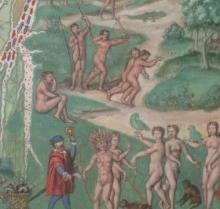 In the early modern period, European perceptions of distant peoples shifted from curiosity and admiration to a growing conviction that Europe resided at the top of a cultural, technological, and racial hierarchy. Making knowledge about both humans and the natural world became increasingly visual pursuits. This paper explores descriptive methods and classificatory schemes for overseas artifacts through the close reading of inventories and catalogs of early modern curiosity cabinets. It argues that these texts were material and discursive objects that helped to constitute cultural hierarchy through typologies of objects. The processes of inventorying human variety also shaped European identities in relation to both classical antiquity and to the material antiquities of new worlds.

Dr. Surekha Davies is Assistant Professor of History at Western Connecticut State University. She writes on cultural encounters, visual and material culture, cartography, monster theory, collecting, and the history of mentalities. Her first book, Renaissance Ethnography and the Invention of the Human: New Worlds, Maps and Monsters (Cambridge University Press, 2016), won the 2016 Roland H. Bainton Prize in History from the Sixteenth Century Society & Conference, and the 2016 Morris D. Forkosch Prize from the Journal for the History of Ideas. Dr. Davies is currently working on a new book project, Collecting Artifacts in the Age of Empire, and is a Mellon longterm fellow at the Folger Shakespeare Library for 2017-18.