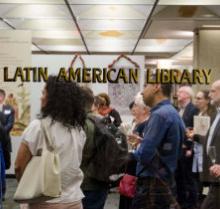 Abstract: My research at The Latin American Library is part of a doctoral dissertation in progress on the consolidation of an institutionalized, public artistic and cultural space of modern art in Guatemala through the Carlos Mérida Museum and, in Costa Rica, in the Museum of Costa Rican Art, to understand how this process influences visual notions about national, regional and global identities in museum collections between 1950-1992. By comparing these spaces and collections, we are able to trace how artistic trends are transmitted, transformed and digested between these countries.  Emphasis is placed on the transnational relationship between these spaces and artists, with organizations such as the OAS, to examine the impact of the work of José Gómez Sicre on Central American art.

Sofía Vindas Solano is an art historian focusing on modern art in Central America.  She is currently a doctoral student in the graduate program in History at the University of Costa Rica where she is working on the consolidation of art museums in Guatemala and Costa Rica.  Sofía Vindas earned a B.A. in History and Art History as well as an M.A. in Political Science at the University of Costa Rica, where she is also an instructor.  She also works as a freelancer on curatorial and research projects.  More recently, she has published articles on anti-imperialism in Costa Rican caricature and on the debate surrounding Art Biennale I of 1971 in newspapers of the time.

Until his retirement in 1998, Richard E. Greenleaf served as the France Vinton Scholes Professor of Colonial Latin American History, and as the Director of the Center for Latin American Studies at Tulane University. He also served as Chair of the Department of History. Dr. Greenleaf grew up in Albuquerque, New Mexico, and took his Bachelors, Masters and Doctoral degrees at the University of New Mexico, where he studied under the dean of Inquisition scholars, France V. Scholes. Greenleaf's doctoral dissertation, "Zumárraga and the Mexican Inquisition 1536-1543," served as the basis for his many excellent publications on the history of the Holy Office of the Inquisition in Latin America.  Greenleaf authored eleven major scholarly books, co-authored or contributed to seventeen others, and published almost four dozen articles in the field of Latin American and New Mexico history. He was the recipient of many distinguished awards, among them the Silver Medal, the Sahagún Prize (Mexican National History Award), and the Serra Award of the Academy of American Franciscan History for Distinguished Scholarship in Colonial Latin American History. In his long and distinguished teaching career in New Mexico, Mexico City and New Orleans, Greenleaf served as mentor to 34 doctoral students at Tulane, and countless masters and undergraduate students. Richard E. Greenleaf died on November 8, 2011.