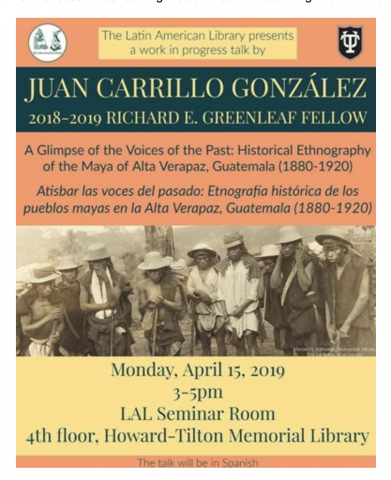 The talk will be in Spanish. Refreshments will follow the talk.

Juan Emilio Carrillo González’s research centers on clarifying the avatars that indigenous society faced during the formation of the nation-state and the emergence of the phenomenon of land dispossession that led to the territorial fragmentation of Alta Verapaz after the introduction of coffee plantations. It considers, at the same time, the process of material and immaterial reconstitution that allowed the Maya to preserve the primordial substrate of their ancient traditions between the end of the nineteenth and the beginning of the twentieth century.

Juan Carrillo González received his doctorate from Centro de Investigaciones y Estudios Superiores en Antropología Social (CIESAS) in Mexico. His research includes diverse themes that articulate rituality, cosmovision, ethnic processes of resistance, and musical practices of the colonial Maya of the Yucatan Peninsula and Central America. He has published in specialized journals in Mexico, the United States, France, Germany, Colombia, and Guatemala. On two occasions he has won the Francisco Javier Clavijero Award for History and Ethnohistory from the National Institute of Anthropology and History (INAH) in Mexico, as well as Honorable Mention for the Jan de Vos Award for his research concerning the south-southeastern regions of Mexico and Guatemala.

Until his retirement in 1998, Richard E. Greenleaf served as the France Vinton Scholes Professor of Colonial Latin American History, and as the Director of the Center for Latin American Studies at Tulane University. He also served as Chair of the Department of History. Dr. Greenleaf grew up in Albuquerque, New Mexico, and took his Bachelors, Masters and Doctoral degrees at the University of New Mexico, where he studied under the dean of Inquisition scholars, France V. Scholes. Greenleaf’s doctoral dissertation, Zumárraga and the Mexican Inquisition 1536-1543, served as the basis for his many excellent publications on the history of the Holy Office of the Inquisition in Latin America. Greenleaf authored eleven major scholarly books, co-authored or contributed to seventeen others, and published almost four dozen articles in the field of Latin American and New Mexico history. He was the recipient of many distinguished awards, among them the Silver Medal, the Sahagún Prize (Mexican National History Award), and the Serra Award of the Academy of American Franciscan History for Distinguished Scholarship in Colonial Latin American History. In his long and distinguished teaching career in New Mexico, Mexico City and New Orleans, Greenleaf served as mentor to 34 doctoral students at Tulane, and countless masters and undergraduate students. Richard E. Greenleaf died on November 8, 2011.