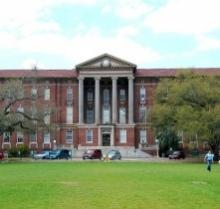 Ryan Joyce is a 5th-year PhD candidate in the Department of French and Italian and the Gender and Sexuality Studies Program at Tulane University. In addition to receiving his Masters in French and Francophone Studies from Tulane University, he also completed a graduate certificate in Gender and Sexuality Studies in 2016. His dissertation examines the figure of the maroon in 19th- and 20th-century francophone Circum-Caribbean literature. His work has appeared in Small Axe, a journal that focuses on Caribbean studies and literary criticism, and Women & Performance: A Journal of Feminist Theory, where he contributed an article for a special issue on queer Haitian performance and affiliation. He was a recipient of the 2017 Gender & Diversity in the Archives Research Grant from the Newcomb College Institute. It is thanks to that grant that he was able to research former Newcomb College professor Marie Augustin and her role in the Francophone Renaissance of Louisiana at the turn of the 20th century.

The lecture includes a free lunch and is open to the public.