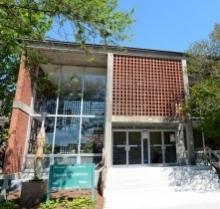 Most Fridays, Newcomb College Institute hosts a free lunch and lecture in Anna Many Lounge in the Caroline Richardson Building on Tulane’s uptown campus. On Friday, September 7, 2018, Fridays at Newcomb will be hosting Latin American Studies alumna Denise Frazier and Ashley Teamer for a talk titled Court Connections.

Denise Frazier is Assistant Director for the New Orleans Center for the Gulf South (Nola Gulf South) at Tulane University. An interest in Cuban politics and African Diaspora culture within Latin America led her to New Orleans where she received an MA and PhD in Latin American Studies at Tulane University. She has lectured and presented seminars and workshops on diversity, African Diaspora culture, contemporary music and performance all around the country. She has also worked with various advocacy groups and non-profit organizations in New Orleans, such as a college access and completion program organization called College Track and Make Music NOLA, a music and performance program for local New Orleans students.

Ashley Teamer was born in New Orleans, Louisiana. Her multimedia work explores the complexities of black femininity through painting, collage, and animation. In both her visual and curatorial work, Ashley uses the object to inform and transform the gallery space. She has been an Artist-in-Residence at the Joan Mitchell Center, Skowhegan School of Painting and Sculpture, and ACRE. In May 2017 Ashley presented her first solo show Sneaker Boy Dreams at 4th Ward Project Space in Hyde Park, Chicago. She will mount her 2nd solo show IDOL MY ICON in New York City October 2018.

The event is free and open to the public.