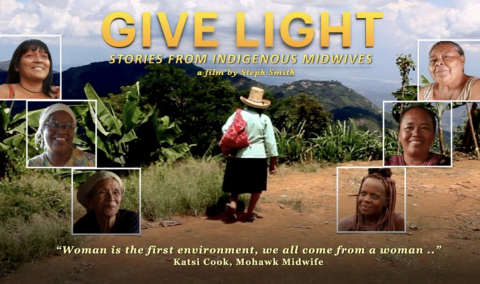 Documentary filmmaker Steph Smith criss-crosses the globe posing the questions: “why are the benefits of the traditional midwife practice absent in most modern care?" The US has the highest maternal and infant mortality rates among comparable developed countries, and Black women across the income spectrum are dying from preventable pregnancy-related complications at 300-400% higher rates of other American women (from the Center for American Progress 2019). Stacey Stewart, president of March of Dimes, shared chilling statistics on how “... the U.S. is the most dangerous place in the developed world to give birth...” In penetrating interviews, nine indigenous midwives from five continents discuss the benefits and challenges to their profession. GIVE LIGHT examines traditional midwifery, juxtaposed with modern obstetrics to bridge the gap between traditional wisdom and modern technology.

This event is hosted by Newcomb Institute.

Please RSVP via the web at https://newcomb.tulane.edu/events/film-screening-and-panel-discussion-give-light-stories-indigenous-midwives or

Tickets are Required
RSVP from the link provided. No tickets required. Open to all.
Please purchase tickets at https://newcomb.tulane.edu/events/film-screening-and-panel-discussion-give-light-stories-indigenous-midwives
For more information on this event, please visit https://newcomb.tulane.edu/events/film-screening-and-panel-discussion-give-light-stories-indigenous-midwives