Fall Series: Challenges and Opportunities for Democracy in Latin America

Fall Series: Challenges and Opportunities for Democracy in Latin America 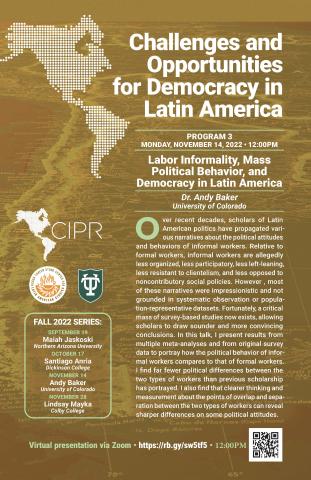 NOW VIA ZOOM ONLY: Registration required: click here to register or scan the QR code on the poster.

Over recent decades, scholars of Latin American politics have propagated various narratives about the political attitudes and behaviors of informal workers. Relative to formal workers, informal workers are allegedly less organized, less participatory, less left-leaning, less resistant to clientelism, and less opposed to noncontributory social policies. However , most of these narratives were impressionistic and not grounded in systematic observation or population-representative datasets. Fortunately, a critical mass of survey-based studies now exists, allowing scholars to draw sounder and more convincing conclusions. In this talk, I present results from multiple meta-analyses and from original survey data to portray how the political behavior of informal workers compares to that of formal workers. I find far fewer political differences between the two types of workers than previous scholarship has portrayed. I also find that clearer thinking and measurement about the points of overlap and separation between the two types of workers can reveal sharper differences on some political attitudes.


For more information contact: Sefira Fialkoff via email to sfialkof@tulane.edu