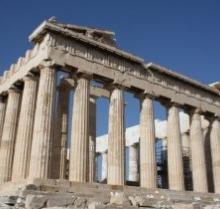 Join Dr. Emily Greenwood as she will be speaking about Greek language/literature, slavery, and the "politics of the human" when she delivers the Dennis A. Georges Lecture in Hellenic Culture.

Emily Greenwood is Professor and Chair of the Classics Department at Yale University where she also holds a joint appointment in African American Studies. She is one of the pre-eminent thinkers on Greek historiography of her generation as well as the leading figure in re-evaluating the legacy of Graeco-Roman culture in colonial and post-colonial contexts. In addition to her book Afro-Greeks: Dialogues Between Anglophone Caribbean Literature and Classics in the Twentieth Century (Oxford 2010) [Joint winner of the Runciman Prize], she has published over a dozen articles and book chapters that investigate the rich and nuanced reception of ancient Greek literature in the African Diaspora, especially in Caribbean literature.