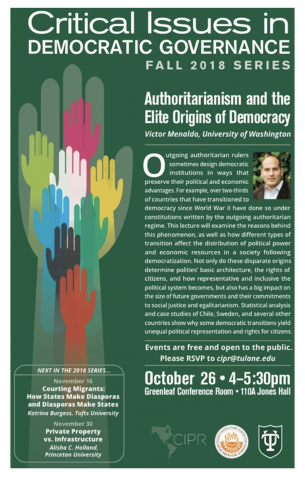 Join the Center for Inter-American Policy and Research and the Stone Center for Latin American Studies in welcoming Dr. Victor Menaldo as part of the fall speaker series Critical Issues in Democratic Governance, on Friday, October 26, in 110A Jones Hall. Dr. Victor Menaldo will give a talk titled Authoritarianism and the Elite Origins of Democracy.

The event is free and open to the public. Please RSVP to cipr@tulane.edu.

Outgoing authoritarian rulers sometimes design democratic institutions in ways that preserve their political and economic advantages. For example, over two-thirds of countries that have transitioned to democracy since World War II have done so under constitutions written by the outgoing authoritarian regime. This lecture will examine the reasons behind this phenomenon, as well as how different types of political power and economic resources in a society following democratization. Not only do these disparate origins determines polities’ basic architecture, the rights of citizens, and how representative and inclusive the political system becomes, but also has a big impact on the size of future governments and their commitments to social justice and egalitarianism. Statistical analysis and case studies of Chile, Sweden, and several other countries show why some democratic transitions yield unequal political representation and rights for citizens.