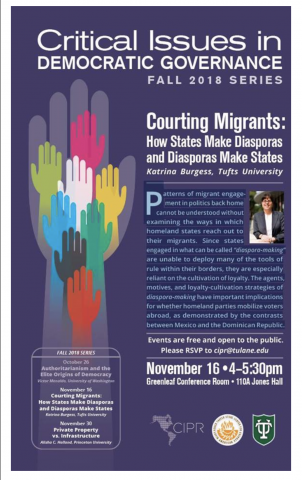 Join the Center for Inter-American Policy and Research and the Stone Center for Latin American Studies in welcoming Dr. Katrina Burgess as part of the fall speaker series Critical Issues in Democratic Governance, on Friday, November 16, in 110A Jones Hall. Dr. Burgess will give a talk titled Courting Migrants: How States Make Diasporas and Diasporas Make States.

The event is free and open to the public. Please RSVP to cipr@tulane.edu.

Katrina Burgess (Ph.D., Princeton University) is Associate Professor of Political Economy of Tufts University’s Fletcher School of Law and Diplomacy. She is author of Parties and Unions in the New Global Economy, which won the 2006 Outstanding Book Award for the best publication on labor issues granted by the Section on Labor Studies and Class Relations of the Latin American Studies Association, and co-editor with Abraham F. Lowenthal of The California-Mexico Connection. She has also published numerous book chapters, as well as articles in World Politics, Latin American Politics & Society, Studies in Comparative International Development, South European Politics and Society, Comparative Political Studies, Politica y gobierno, and International Studies Review. Dr. Burgess has also served as Assistant Director of the U.S.-Mexico Project at the Overseas Development Council in Washington, D.C. and Associate Director of the California-Mexico Project at USC in Los Angeles.

Patterns of migrant engagement in politics back home cannot be understood without examining the ways in which homeland states reach out to their migrants. Since states engaged in what can be called diaspora-making are unable to deploy many of the tools of rule within their borders, they are especially reliant on the cultivation of loyalty. The agents, motives, and loyalty-cultivation strategies of diaspora-making have important implications for whether homeland parties mobilize voters abroad, as demonstrated by the contrasts between Mexico and the Dominican Republic.