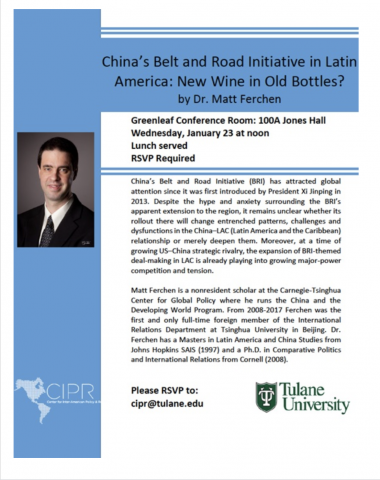 The Center for Inter-American Policy and Research will be hosting Dr. Matt Ferchen for a talk titled China’s belt and Road Initiative in Latin America: New Wine in Old Bottles? on January 23, 2019 at noon.

China’s Belt and Road Initiative (BRI) has attracted global attention since it was first introduced by President Xi Jinping in 2013. Despite the hype and anxiety surrounding the BRI’s apparent extension to the region, it remains unclear whether its rollout there will change entrenched patters, challenges, and dysfunctions in the China-LAC (Latin American and Caribbean) relationship or merely deepen them. Moreover, at a time of growing US-China strategic rivalry, the expansion of BRI-themed deal-making in LAC is already playing into growing major-power competition and tension.

Matt Ferchen is a nonresident scholar at the Carnegie-Tsinghua Center for Global Policy where he runs the China and the Developing World Program. From 2008-2017 Ferchen was the first and only full-time foreign member of the International Relations Department at Tsinghua University in Beijing. Dr. Ferchen has a Masters in Latin America and China Studies from John Hopkins SAIS (1997) and a Ph.D. in Comparative Politics and International Relations from Cornell (2008).

Lunch will be provided. Please RSVP to cipr@tulane.edu.