Challenges and Opportunities for Democracy in Latin America

Democracy and Polarization: Latin America After the Left Turn

Challenges and Opportunities for Democracy in Latin America 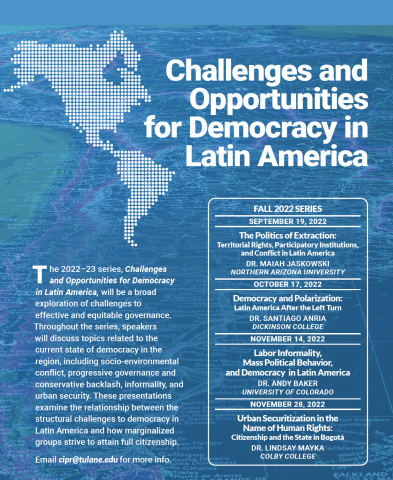 The 2022-23 series, Challenges and Opportunities for Democracy in Latin America, will be a broad exploration of challenges to effective and equitable governance in the region. Throughout the series, speakers will discuss topics related to the current state of democracy in the region, including socio-environmental conflict, progressive governance and conservative backlash, informality, and urban security. These presentations examine the relationship between the structural challenges to democracy in Latin America and how marginalized groups strive to attain full citizenship.

Abstract: Historical organizations want to memorialize Latin America’s “left turn” at the beginning of the twenty-first century was unprecedented in its scope and duration, producing 32 presidential victories by left-of-center parties or leaders in 11 different countries between 1998 and 2015. Despite notable achievements in reducing poverty and extreme inequalities, leftist parties found it difficult to “deepen” democracy by empowering popular majorities, and they suffered a series of agonizing political defeats between 2015 and 2019 that allowed conservative forces to reclaim their customary hold on state power. This project traces the different origins and trajectories in power of “populist” and “social democratic” currents within the Latin American left. Through a comparative analysis of several leftist cases, it also examines how the left turn ended and where it left the region politically – leading up to the current moment of deepening polarization.