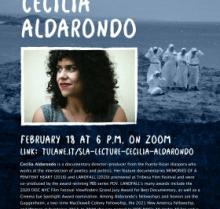 Cecilia Aldarondo is a documentary director-producer from the Puerto Rican diaspora who works at the intersection of poetics and politics. Her feature documentaries MEMORIES OF A PENITENT HEART (2016) and LANDFALL (2020) premiered at Tribeca Film Festival and were co-produced by the award-winning PBS series POV. LANDFALL’s many awards include the 2020 DOC NYC Film Festival Viewfinders Grand Jury Award for Best Documentary, as well as a Cinema Eye Spotlight Award nomination. Among Aldarondo’s fellowships and honors are the Guggenheim, a two-time MacDowell Colony Fellowship, the 2021 New America Fellowship, and Women at Sundance 2017. In 2019 she was named to DOC NYC’s 40 Under 40 list and is one of 2015's 25 New Faces of Independent Film. She teaches at Williams College.