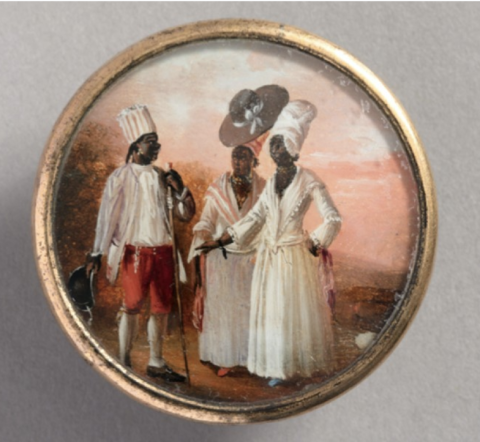 Dr. Anne Lafont lectures on "The buttons of Toussaint Louverture." The legend and reality of the 18 buttons kept at the Cooper-Hewitt Museum in New York force us to take a close look at their making in the latter part of the eighteenth century Caribbean and in the light of one of its most illustrious black personalities: Toussaint Louverture, pioneer of the Haitian revolution, emancipated slave, ally of the European powers, deposed prisoner and captured by Napoleon Bonaparte’s armies, who died in exile in a French dungeon. The function, iconography, medium and biographical fortune of this series of buttons inform an exceptional history where Caribbean, French and American figures intersect over two centuries. Unfolding the panoply of buttons and following their phenomenology, on a formal and social levels, from manufacture to use, is to write a piece of the history of art of the Black Atlantic.

Dr. Anne Lafont is an art historian and professor at the École des hautes études en sciences sociales in Paris. She is interested in the art, images, and material culture of the Black Atlantic, as well as in historiographical questions related to the notion of African art. She has published on art and knowledge in an imperial context, on gender issues in the art discourse of the 18th and 19th centuries, and more recently she published a book : L'art et la race. L'Africain (tout) contre l'oeil des Lumières. It was awarded the 2019 Fetkann Maryse Condé Literary Prize and the 2020 Vitale and Arnold Blokh Prize. Anne Lafont participated, as a member of the scientific committee, in the Musée d'Orsay exhibition The Black Model (2019). In 2021, she was awarded a residential fellowship from the cultural services of the French Embassy in the United States, the Villa Albertine, and served, for the academic year 2021-2022, as the Robert Sterling Clark Visiting Professor of Art History at Williams College (Massachusetts). Her most recent book, L'Afrique et le monde. Histoires renouées de la préhistoire au XXIe siècle, is co-edited with François-Xavier Fauvelle.


Tickets are Not required